I know, a lot of holy days. Living in a Catholic country, everyday has it’s patron saint, some even more than one. Today is Sant’ Antonio Abate. Not the Saint Anthony who you pray to if you lose something, but the one that is the Patron Saint of animals. 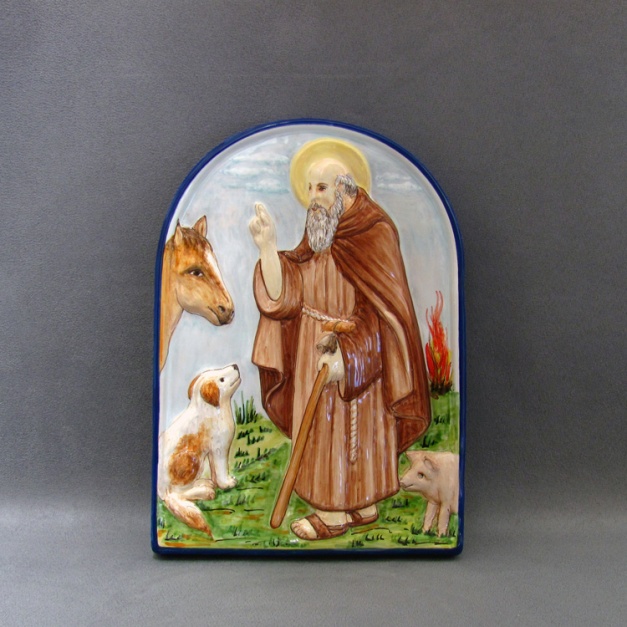 How do you tell? Look down, he always has animals down by his feet. It is one of my favorite festivals to attend.

I have a collection of holy cards,just in case I want to make a little shrine for the kitchen.

This is a really elegant version, often you will see an unglazed tile on the front of farms.

The saint was born in Egypt and wandered the desert with a pig. Pigs are considered life for Italians. If you have pigs, you will never starve.

In the old days, before refrigeration, pigs were killed on January 17th, San Antonio’s day, as it was always cold. A Norcino, a specialist from Norcia in Umbria, would come to your home and slaughter the hog and you would preserve it for the up coming year. From a hog you will get 2 Prosciuttos from the back of the animal and two Spalle from the shoulders. These are cured with salt and ready in about 18 months. The feet, Zampette, can also be salted and peppered and are used to flavor beans while cooking and then the boiled meat can be pulled off and eaten with the beans. The most nobile part of the pig are the long loins for the roast pork, Arista. Pork fat back can be cooked down for Strutto, a cooking lard or aged to create a lard to eat sliced like prosciutto called Lardo. The most famous near me is Lardo di Colonnata, aged in marble boxes by the marble workers in the quarries where the marble for Michelangelo’s statue of David came from. Other meat is ground and turned into sausages to eat right away or seasoned and turned into salami to age. From the head, they boil it, remove the meat, season it and then create their headcheese, known as Soprasatta.

My friend Kate Hill and I did a presentation at a culinary conference in Seattle, , comparing the traditions and uses in France, Italy and then we had Fergus Henderson from London, who wrote the cookbook, The Whole Beast: Nose to Tail Eating.

Kate explained how the families that raise the pigs in France, do it all themselves and their recipes. I presented more on the Italian butcher and the array of different regional dishes and preparations. Fergus spoke about serving the whole hog in his restaurant.

For all of us, the importance of having respect for the animal while it is alive and also when it is killed, to use the entire animal.

We created a blog for this with some of our favorite recipes. Do stop by and let me know if you try some of them.

In some areas of Italy, Sant Antonio is celebrated with huge bonfires, called a falò.

This is from the paper Milano Today: 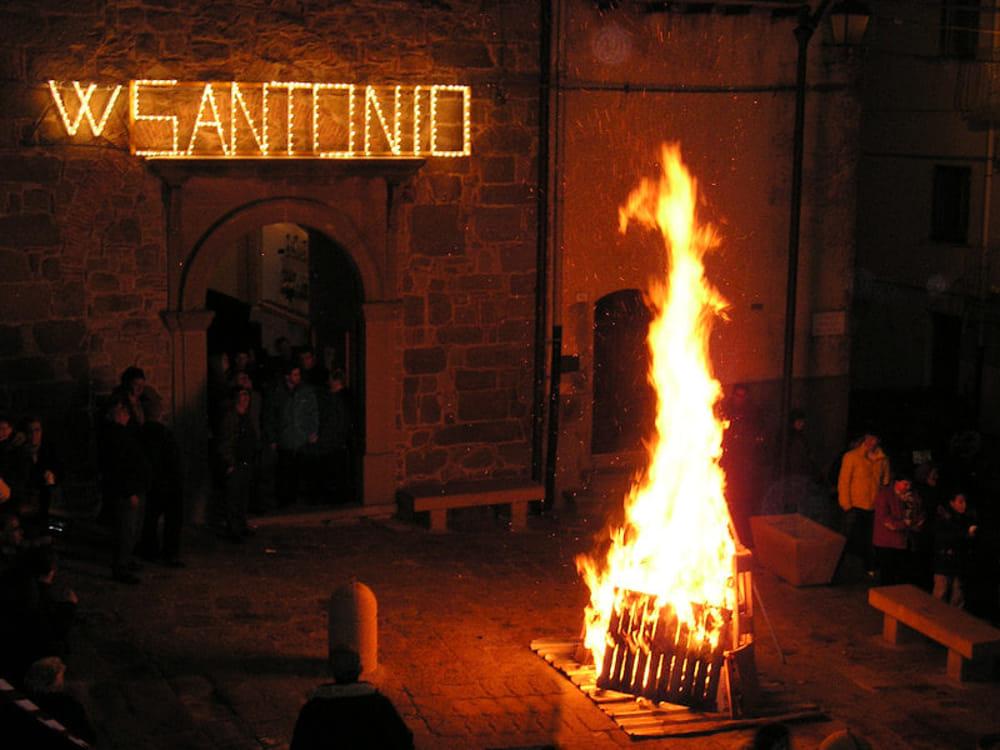 Near where we live, they do the Blessing of the Animals, which I have written about on my Divina Cucina blog. This year we missed it as they hold the festival on the closest Sunday usually and we were at lunch with friends.

I adore going there as it is one of the few places I can still get the rare blood pancakes to eat. The pigs blood is never wasted. There are several sausages also made with it. Names change region to region. If you are in Tuscany, look for Burista or Mallegato. The crepes, which are on my blog post are very thin and tasty and you can order them with grated Parmigiano cheese or as I get them, with sugar.

Do look for festivals when you are planning your trips. It really gives you an insight into daily life.