The patron Saint of cooks is San Lorenzo, Saint Lawrence,perhaps because he was grilled to death? Folklore has it that  he was placed over an open fire on a grill and asked to be turned over as he was done on one side.

He is also seen holding a grill in his hand.

or directly over the open fire on the grill which is one of my personal favorites.

The neighborhood I lived in in Florence from 1988 until 2009, was the San Lorenzo area of Florence. The main church is San Lorenzo and the Mercato Centrale is also sometimes referred to as the Mercato San Lorenzo as is the street market outside.

Today there is a celebration at the market, they start in the morning with a parade and religious ceremony and tonight the vendors offer a party to the public with pasta and watermelon.

There was a famous film, La Notte di San Lorenzo by the Tavini brothers, about the fascists during the second world war, passing through Tuscany. 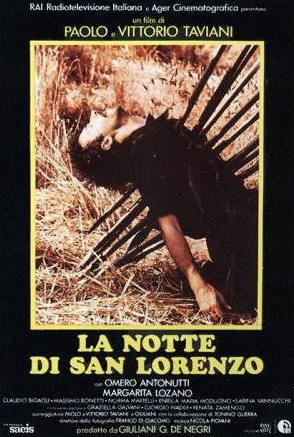 It is known as the night of the falling stars, so everyone comes out to the countryside and lays on their backs to see watch.

They also hold a wine festival, Calici alle Stelle at night to star watch while sipping wine! Not a bad idea. You can check the link for a party near you!

Here is an blog post I did awhile back with a link to my Zazzle shop if you would like your own San Lorenzo for the kitchen.